Please call or leave your information and we will get back to you as soon as possible.

What Is The Difference Between A Cast Iron and PVC Sewer Pipe? 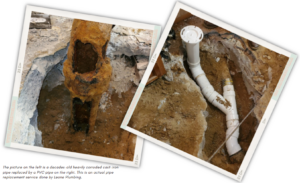 Sewer pipes are one of the important components of a good plumbing system. The most popular choices are cast iron and PVC sewer pipes. With these options, which pipe is better? Before you pick which pipe to use, make sure to know the difference so you can determine which material is best for your needs.

Cast iron pipes have a long history of usage dating back as early as the 1600s. Most old buildings still hold cast iron pipes for many decades (even centuries). Cast iron sewer pipes can withstand the test of time. The famous fountains of Versaille in France hold the oldest water supply system using cast iron from the late 17th century which is still in use up to this day! With its long history, we can say that durability is the main strength of a cast iron pipe. 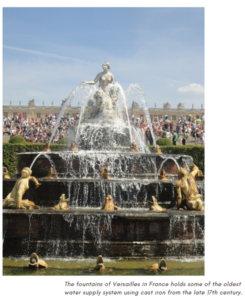 PVC pipes have been used for 80 years in plumbing and construction. It is relatively young compared to cast iron pipes. This material is made from plastic and has many benefits. It is popularly used because it’s lightweight and most of all, versatile. PVC pipes are also durable and resistant to corrosion and increasing temperature.

A cast iron is indeed a strong material. But when a blunt force is applied, it can become brittle and break. PVC on the other hand is much more flexible and resistant to blunt forces and does not break easily.

Friction can fluctuate water pressure. PVC pipes are much smoother than cast iron pipes. That means, there is less fluid friction and flow rates are consistent with PVC pipes compared to cast iron.

PVC pipes are almost half the price of cast iron pipes. Since the material is lightweight, installation is much easier which can also lower the labor cost.

Cast iron pipes can resist high temperatures and won’t melt easily. The heat threshold of PVC is 450 degrees which can melt in the event of fires.

Vibration can produce sound (noise). A cast-iron pipe is thick and dense and does not cause too much vibration when water flows through. Since PVC pipe is lightweight, it could vibrate due to water flows which result in noise.

Cast iron pipes are adjustable compared to PVC. The fittings can be adjusted even after the installation. However, with PVC, the portion of the plumbing system has to be replaced should there be changes needed.

Between Cast Iron And PVC Sewer Pipes, Which Are Better?

We highly recommend using PVC pipes for modern plumbing systems. The reality for most home and business owners today is that sewer waste contains much more than pure running water like the fountains of Versailles. Grease from the kitchen as well as other sewer waste can lead to significant corrosion and a shorter life expectancy in cast-iron pipes. Leone Plumbing therefore highly recommends using PVC pipes for modern plumbing systems. If you are unsure of the option, contact us today for a consultation.